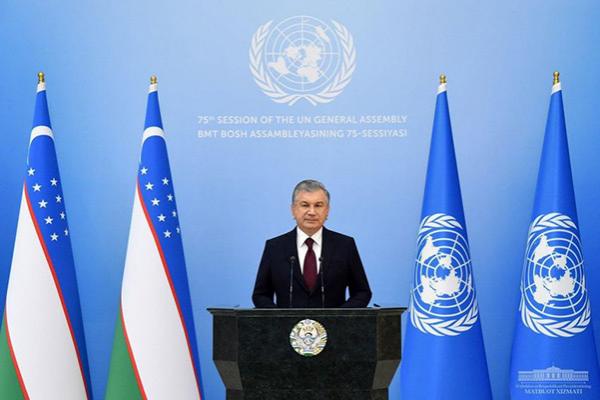 The 75th Session of the United Nations General Assembly opened on Tuesday, September 22nd. As part of the General Assembly, His Excellency Mr. Shavkat Mirziyoyev, the President of the Republic of Uzbekistan, gave an historic address on September 23rd. President Mirziyoyev delivered his speech in the Uzbek language, the first time in history that a speech at the General Assembly has been given in Uzbek. In his remarks, the president focused on the global issues of the pandemic, climate change, peace in Afghanistan, development of the Central Asian region, and poverty. He ended reiterating Uzbekistan’s commitment to working with the U.N. and countries around the world to address these issues comprehensively and peaceful.

In recent months, the Center for Slavic and East European Studies (CSEES) and the Department of Near Eastern Languages and Cultures (NELC) at The Ohio State University have started a dialogue with the Embassy of Uzbekistan in the United States to discuss opportunities for collaboration. Ohio State is home to the largest Uzbek language program in the country. As Uzbekistan seeks to strengthen its role in the Central Asian region and emphasize its language and culture, CSEES and NELC look forward to collaborating further with the Uzbek government to support the study of the Uzbek language and Central Asian culture and history. President Mirziyoyev’s speech today marks an important point in the history of Uzbekistan.